The foundation of the Order of St. John AD 1099 represents - as I tried to describe in the above - a remarkable event in the history of religious orders. It was not just the origin of one of the many religious orders, but of the first hospital order of the church. It set spiritual standards, which contributed to the moulding of the life of the church until today. The spirituality culminating in hospitality was the basic spiritual innovation which the Order of St. John contributed to the history of Religious orders. Based in the faith it always was and is still today the motivating force for the order. Even as the order was transformed, beginning with the times of the second director Raymond du Puy, into a military order, who also took on military and juridical tasks as a sovereign - emerging from the spirit of protection to the pilgrims and the idea of the "militia Christi" - which was the reason that the order appeared in its turbulent history rather as a military power than as a hospital order, the order has in no phase of its development forgotten to fulfil its main task which is hospitality. 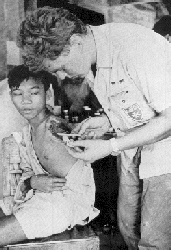 As the Maltese cross, the symbol of the eight beatitudes of Christ's Sermon on the Mount, in refugee camps and on hospitals, on centres for medical research and ambulances, on institutions for civil defence and rehabilitation, on hospital trains for pilgrimages for the sick and on training facilities for nursing personnel, gives an eloquent witness, that the Order of Malta translates it's timeless motto "Protection of faith and service to the poor" into contemporary works of Christian charity, we are reminded of the word of the founder of the Order, Blessed Gérard:

"Our brotherhood will be everlasting,
because the ground which this plant is rooted in, is the misery of the world - and because, God willing, there will always be people, which want to work towards the alleviation of these sufferings and making this misery more bearable."

May the Order of St. John / Malta, based on its spiritual foundation, humbly serve the hungry and thirsty, the estranged and naked, the sick and imprisoned Lord in all future, and thus become a sign of Christian faith, cheerful hope and apostolic love for the people.

This page is part of the publication Blessed Gérard and his "Everlasting Brotherhood": The Order of St. John