The Lutheran Johanniter Order acquired the house of Es Schurefa at the Via Dolorosa on 11 December 1866. It had 18 beds and was used as a rest- and guesthouse for travellers to the orient and for mission personnel. Since 1866-70 the Sunday Service for the little German community was celebrated there in the dining room.

The Johanniter Ordensblatt from July 1936 states "The hospice is rather regularly used by strangers, Johanniter Knights have rarely asked for accomodation there... The pilgrimage traffic  with Palestine was interrupted during the World War (I). The Kaiserswerther Diakonisse, Sr. Theodore Barkhausen had maintained the interests of the Order meanwhile in an examplary way. The Order could reestablish the connection with the hospice only after the World War. It is administered under the leadership of a local committee ever since... The work in the Johanniter Hospice in Jerusalem is little at the moment. That has different reasons. There are many tourists who wish to be driven with their luggage right to their hotel. This is much facilitated in our days because all hotels apart from the Austrian and our hospice are situated outside the Old City and are accessible by car. There is also a number of tourists, who are afraid to walk through the Old City on their own in the evening. We will hardly get these tourists into our hospice. - here are also travellers, though, who consider it interesting to live right in the Old City for a few days and to take pleasure in the view over the temple area on the Mount of Olives and the panoramic view over the roofs of the Old City  with their unique magic, especially at moonlight. ..."

An old prospectus [year?] advertises: "Since about the middle of the last [18th] century, when the [Lutheran] Order of St. John was re-established, it was in keeping, faithful to its old principles, the Hospice of the Order of St. John, situated in Jerusalem, quite close to the old site. In view of its central situation in the Old City (only 5 minutes' walk from the Church of the Holy Sepulchre and 8 minutes from the Temple area), its antique style of building, but modern outfit (electric light, telephone, running water and bath), ... Christian and friendly, family-like character (accommodation 18 beds), offering the possibility of lodging only, or full board at moderate prices, this Hospice can be warmly recommended to visitors to the Orient and missionaries as a boarding-house and place of rest. The manager of the Hospice arranges for trips in the country at cheap prices, and is ready, as far as possible, to act personally, free of charge, as a guide for excursions in Jerusalem or outside the city. Particulars and prices are supplied on application by the manager."

Sr. Renate Sopp of the Brotherhood of Jesus explains in an article "Johanniter Order's Hospice in Jerusalem - In the busy Old City" [Johanniter Ordens-Hospiz in Jerusalem - Im Gewühl der Altstadt]: "...The ancient building of the Johanniter-Hospiz is the home of the sisters' community of the Brotherhood of Jesus [Jesus-Bruderschaft] in Jerusalem since 1985. ... The Brotherhood is affiliated to the Diakonisches Werk of the Lutheran Church. Its centre is in Gnadenthal / Germany. ... We enjoy the Johanniter-Hospice also because we happily and conscientiously continue the tradition of this house. It was established in the middle of the last century to accommodate pilgrims and homeless people and to give quite practical help and inner orientation to the latter. Our service today is given in a much smaller scale, but has is in going with the past. One of the biggest and most beautiful rooms of the hospice is the former dining room. The first German Lutheran services and bible lessons in Jerusalem were held there when the German community still consisted of a hand full of people. We changed this room into a chapel, where we celebrate our liturgy of hours , where there is room for private prayer - for guests as well. It encourages and enjoys us that prayers were said there already 100 years ago. The Johanniter-Hospice is situated right in the centre of the busy Old City of Jerusalem. It lost its character as a hospice during World War II and became a shelter for Arab. refugees of the Independence war of Israel. Three families of these refugees still occupy the rooms which were then allocated to them. Others died in the meantime, moved out or were bought out by the Johanniter Order. We live now in the vacated rooms. To 'live' is actually only correct in a limited sense, because not all of them can be lived in. There are lots of renovations still pending. We are glad that we can manage these works ourselves as tenants of the Johanniter Order and with its support.  and so we experience directly that old run down rooms become beautiful and usable again.   Our Latroun Brothers help us. Many volunteers are helping. We all enjoy to see the resurrection of the Johanniter Order's Hospice right in Jerusalem. A symbol of this is the new carved sign on top of our entrance, which heralds - like in olden times - now again: Johanniter Order's Hospice."

Roland Werner writes in an article "New ways - open doors in Jerusalem" in Kreuz & Quer No. 13 (1993), Letter to the friends of the Meeting of Christ [Christus-Treff] and the Jesus community [Jesus-Gemeinschaft]: "A centre of life of the Community of Jesus in Jerusalem in the Johanniter Hospice in the Via Dolorosa. ... In June 1992 ... the Brotherhood of Jesus requested our community to continue the work in the Johanniter Hospice in their spirit. ... [ The take over was finalised in March 1993. The aims of the house are summarised as:] It should become an open house for many people, run by a community, which plans and works in close connection with the Community of Jesus and the Meeting of Christ in Marburg..." 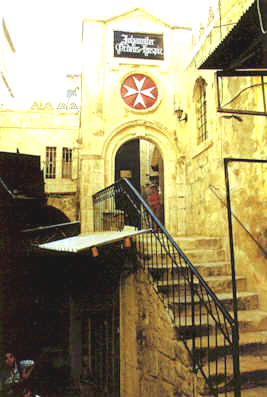 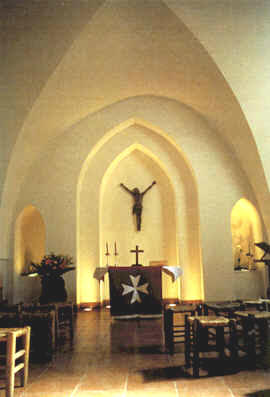 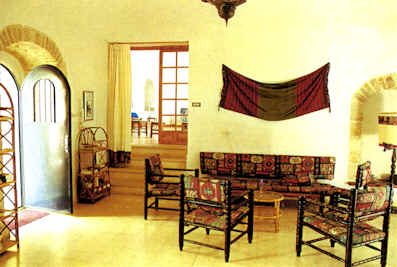 This page is part of the publication Blessed Gérard and his "Everlasting Brotherhood": The Order of St. John