2. Historical developments up to the foundation of the Order of St. John

The year AD 1099 is nowadays commonly agreed upon to be the year of the foundation of the Order of St. John. I'll tell you later on in detail about it. There are many legendary stories and reports about the origin, because there are only few written sources of evidence which could proof what the historical facts really are. The spectrum of traditions stretches from dating back the origins into times before Christ, in order to show off with a history as long as possible, to the hypothesis of a totally independent spontaneous foundation in AD 1099.

William of St. Stephen (a French historian) tells the legend, the Jewish high priest Melchior would have dishonoured the grave of King David, what King Antiochus wanted to punish him for. Divine inspiration would have influenced Antiochus to spare Melchior and to change the deserved sentence into making Melchior build a hospice by means of the stolen treasure right at that place which was destined to be sanctified later on by being the site of Christ's crucifixion. Judas Maccabeus would have supported the new foundation considerably. Later on Zachariah, the father of John the Baptist - who is the patron saint of the Order of St. John and whom it is named after - would have taken over the management of that hospital. When Julian the Roman succeeded Zachariah in managing the hospital Christ himself would have visited the hospital. Even St. Stephen - predestined for this task by being the first deacon of the church - is said to have been the superior of the order. This legend seems to come from the 12th century, as in AD 1291 people in Rome were convinced, the hospital of Jerusalem would have been the scene of many events of the New Testament, and in AD 1260 the Master of the Hospital himself assumed, Stephen would have been one of his predecessors. William of St. Stephen could not verify the authenticity of that legend and thought, the hospital would have seized when Jerusalem was destroyed by Titus.

Louis Beurrier, an old French writer, claims the hospital was founded by John Hircanus of the family of the Maccabees, who ruled from 134 - 104 B.C., to receive the pilgrims coming to Solomon's Temple close to one hundred and fifty years before the birth of Christ. 2 Maccabees 3.11 mentions Hircanus as a man of great dignity. A memorial of John Hircanus was the "Hirkanus Monument", which (in 30 A.D.) stood exactly at that place, where later the church of St. John the Baptist would be built, which formed part of the hospital of Jerusalem.

William Caoursin published in 1496 that the hospital would have been founded by Judas Maccabeus himself, the apostle St. Peter would have been given the keys of heaven by Jesus right in that hospital, the first council of the church would have taken place there, St. Stephen would have been its manager and he would have nominated St. John the Baptist to be the patron saint of the hospital.

A. v. Winterfeld (a German historian) wrote in 1859, that Caesar Constantine and his mother Helena would already have instituted hospitals to accommodate and nurse pilgrims in the Holy Land and on the routes leading to Jerusalem.

Masson claims: "Their (the Hospitallers') birthplace was the celebrated hospital built by Justinian (he headed the Byzantine Realm from AD 527 to 565) in Jerusalem." 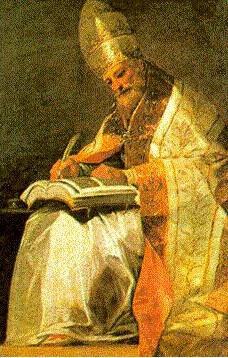 Historically proven is the fact that Pope Gregory the Great sent Abbot Probus to Jerusalem at the end of the 6th century to erect a xenodocheum [the Greek word xenodokeo (xenodokeo) means verbally translated: to render hospitality] there. Breycha-Vauthier de Baillamont even talks about a hospital, a hospice and a church whose patron saint was Mary. It was called St. Maria Latina in order to distinguish it from the Greek church of St. Mary. This hospital was finished in 603 and was probably destroyed in 614 by the Persians.

Charles the Great (Charlemagne) renewed Gregory's institution towards the end of the 8th century with the permission of Haroun al Raschid, the famous caliph of the Arabian Nights and put it under the supervision of the Benedictine monastery at the church of St. Maria Latina. The pilgrim's report of the monk Bernard reports about this hospital about AD 870. It was destroyed by the fanatical caliph Hakem Biamrillah alias El-Hakim probably about AD 1010 together with the church of the Holy Sepulchre and many other Christian buildings, in spite of the fact that his mother was a Christian.

Merchants from Amalfi in the Realm of Naples (Italy) rebuilt the church and monastery of St. Maria Latina in AD 1023 after tough negotiations with Mustesaph, caliph of Egypt, under the leadership of Pantaleon Mauro. Once again Benedictine monks took charge of it and they accommodated male pilgrims in the monastery. For female pilgrims a hospice on its own was erected, whose chapel was dedicated to St. Maria Magdalene. Another hospice for male pilgrims was built too, whose chapel was dedicated to St. John the Almoner.

[Church of St. John the Baptist]

Directors were in charge of these branch hospices, who initially were either Benedictine monks or who at least were nominated by the Benedictine Order. Historical sources name a Master Anzelinus and later a Superior Geraldus to be directors of the hospice of St. John. The hospice of St. Maria Magdalene is said to have been directed by a noble roman lady with the name of Agnes. Archaeological evidence proofs the early existence of these three institutions.

It is uncertain, but not impossible, that there is a continuity between the Gregorian, the Carolinian and the Amalfitan institutions in the course of history. 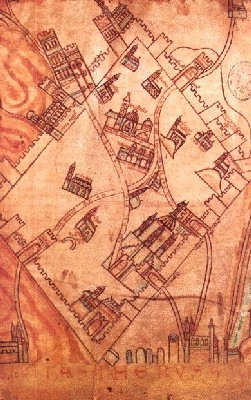 Some historians report, that Godfrey of Bouillon had found the hospital running after having taken Jerusalem on July 15, 1099 ( which event and date represent the aim and end of the First Crusade ) and the sick and injured crusaders would have been nursed therein. Being taken with the magnanimity of the Brotherhood Godfrey would have made rich donations to the hospital, which enabled it to become independent. Gérard, its director, therefore would have terminated the connection to the mother hospital of St. Maria Latina and would have gone his own ways. However, the hospital next to the monastery of St. Maria Latina received its own donations already in AD 1099.

Another group of historians states, the hospital would have been founded before AD 1099 and would not have any direct or indirect connections to the Amalfitan institutions. According to these hypothesises Gérard is now called the first director or founder of either the Amalfitan hospital or of the hospital erected after the conquest of Jerusalem. In the same way as the exact origins of the hospital are not totally known, the origins / descent of Gérard himself are not clear.

It should not be my task, to discuss these hypothesises or to report on further variations thereof. I am moreover convinced that neither the latter hypothesis would be a condition to demonstrate the exceptional importance of the foundation, nor that the first hypothesis would diminish the said importance:

The hospice of St. John is the historical cradle of the contemporary Order of Malta. 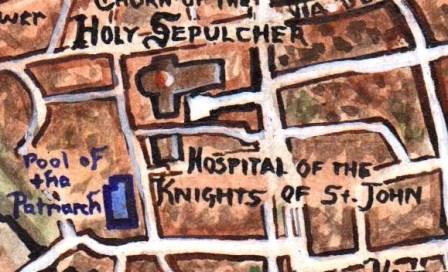 The earliest description of the first hospital of the Sovereign Military Order of St. John of Jerusalem of Rhodes and of Malta.